It's been a very busy week in the motoring world. To help Bruce and Smith through all the new vehicle debuts, duPont Registry Content Manager and Motor1 contributor Gabriel Vega joins the program, and that's a big deal. Why? Because he's one of the few people in the world who already checked out the new Chevrolet Corvette Z06 in person!

The new Z06 is arguably the biggest debut of the week and Vega was at the Petersen Automotive Museum in Los Angeles for the reveal. In case you haven't heard, it's officially the most powerful naturally aspirated V8 production car ever, developing 670 horsepower at a bonkers 8,400 rpm. That's only 200 rpm below the 8,600-rpm redline, but that's how the 5.5-liter DOHC V8 in the Z06 likes it.

The car is also a bit wider and it wears more aggressive bodywork, but Vega's initial in-person impression was that the Z06 seemed more elegant. It's an interesting take, but it matches with the rather tame first impression the silver Z06 teaser image gave many people. Of course, the car gets meaner with the Z07 race package, giving buyers a choice between mild and wild.

From high-revving supercars to luxurious off-road legends, the trio shifts to the new Range Rover. The big SUV doesn't get a full refresh very often, and the new model doesn't disappoint on the luxury side with its swanky interior accommodations. Outside, however, Bruce raises an interesting question. Past Range Rovers have balanced luxury with ruggedness, but where's the ruggedness in the new model? With very smooth lines, a low stance, and very low-profile tires, it looks more like a people-mover for the street. Is this what modern Range Rover buyers want? The trio enjoys an interesting discussion on the topic.

The other big debut is the new Mercedes-Benz SL-Class, and whoa, Nellie is it a looker. All-new from the ground up and packing all-wheel drive for the first time, Smith believes it has the best-looking backside of any new car available now. Organic lines and smart proportions dominate its 2+2 configuration, and with Merc's familiar twin-turbocharged V8 under the hood, it should drive every bit as good as it looks.

With these high-profile debuts spanning most of the program, Vega and the Chris's dive into some of the custom cars automakers will bring to the 2021 SEMA show. Bruce shares his excitement for Toyota's retro-themed Tacozilla Tacoma overlanding vehicle and an old military Jeep from Mopar that's in the works. Smith gets positively giddy over a '90s Honda Accord station wagon race car wielding a Civic Type R engine and a widebody Silverado Smokey and the Bandit tribute truck. Vega is all about Bronco, and he's excited to see the creativity in Bronco builds at what will be the reborn SUV's first in-person SEMA event.

Previously On Rambling About Cars: 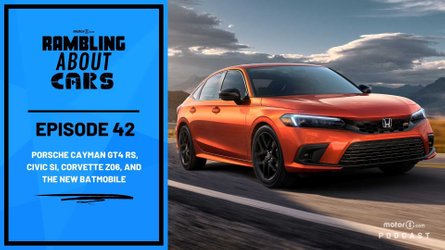 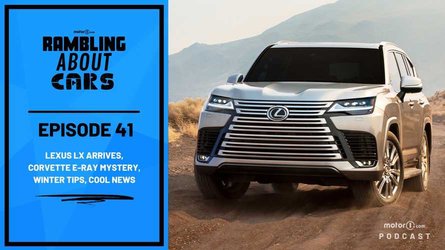 Between all the new vehicle debuts and all the SEMA offerings, it's an exciting time in the automotive world right now. How do you feel about the new Z06 and its high-revving V8? Is the new Range Rover rugged in any way? Is there a better-looking car anywhere in the world than the new Mercedes SL? You know the drill; comment here or shoot us an email: podcast@motor1.com

In addition to our Motor1 Podcasts YouTube channel, you can still catch us on your favorite streaming audio channel every Friday as always. You'll find Rambling About Cars on every major podcast platform including Apple Podcasts and Spotify. Please like, follow, and comment because it exposes the show to more car crazy enthusiasts. And the more enthusiasts joining us on this automotive odyssey, the better.